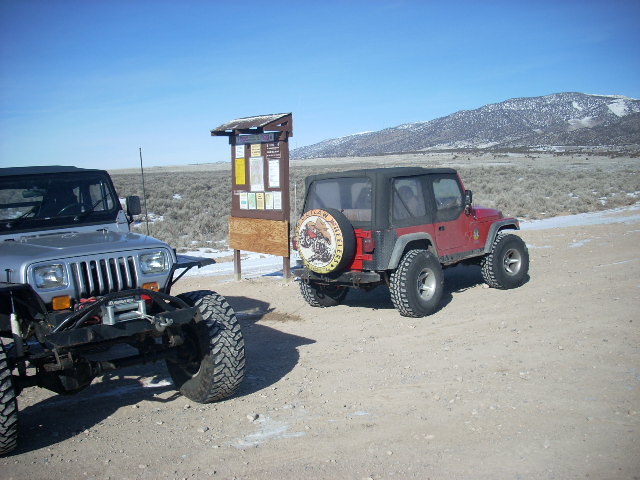 Aired down and ready to get going.

Larry drove his out there like a man and I trailered mine. Not after a little swearing to get out there, though. My PowerStroke did NOT want to start in the 20* weather after not being run for about 6 days or so. Took me about 30 minutes to get that thing going. Then I had to 'unfreeze' the trailer from the ground in the back of my house. 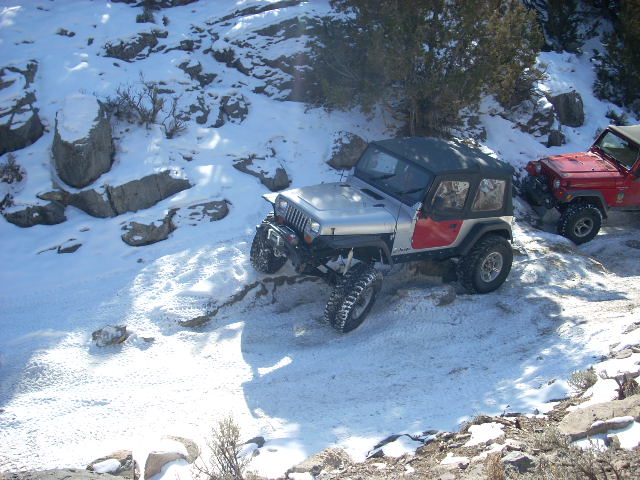 I kicked Corbin (my 10 year old) out of the Jeep to take a few pics. I didn't expect anything spectacular, but Santa brought him a new digital camera for Christmas. It's pretty sweet. Larry and I were met with packed snow in the bottom of the wash. It took a little to get up some of the easy rocks, but for the most part was just kind of fun bouncing around in the bottom of wash. 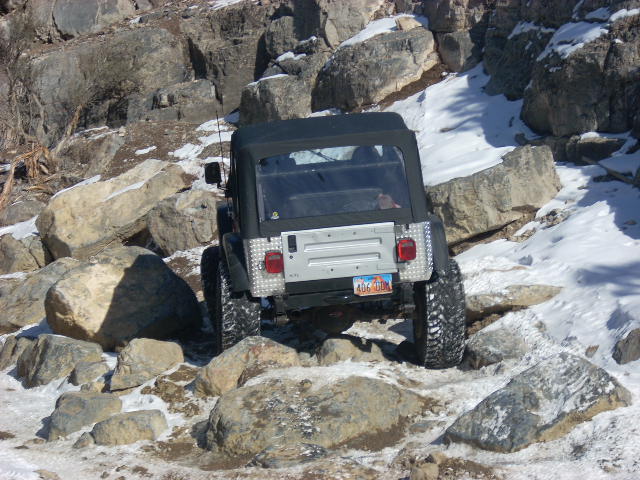 Being the arrogant dude I am on a trail that's used this much, I hit every rock I could possibly hit. I'm surprised how grippy slippery tires are, and then surprised how slick they are on the next rock. Glad I had 37" tires, is all I can say. Larry's running 35" tires and he didn't have much trouble either. 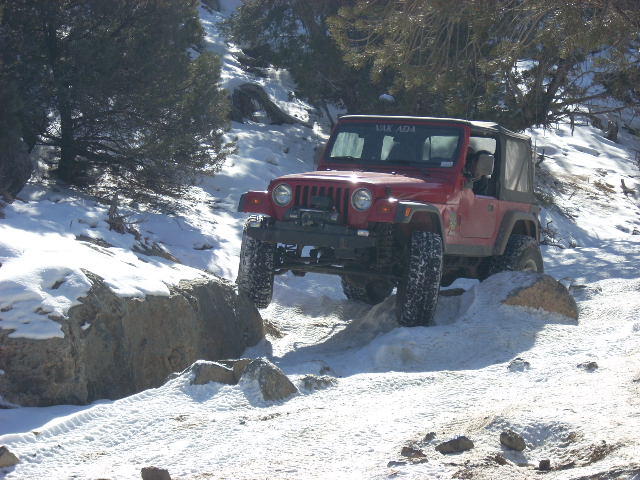 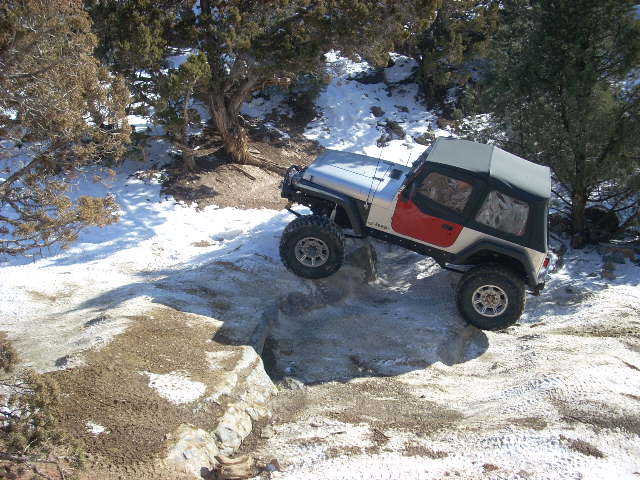 Hey, look! A Jeep with red doors. My daughters first trip ever. I had to 'bump' quite hard to get up this obstacle with all the snow and the slick. I tried about 3 times to ease my way up it, but there is a reason there's a heavy pig of an axle in the front. I used the skinny pedal a little and up it goes. 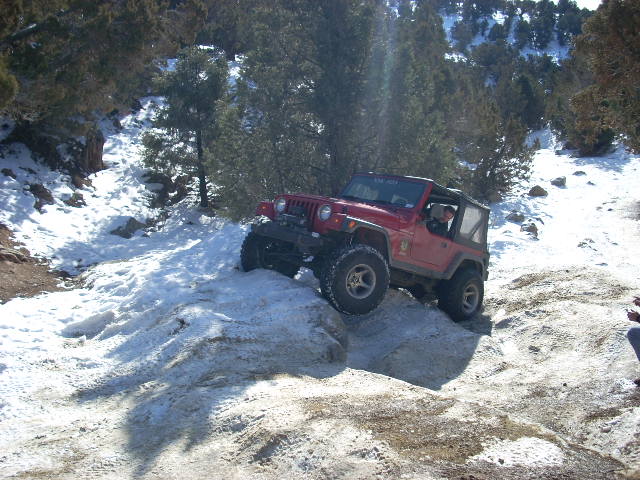 Here's Larry on the waterfall on RattleSnake. His rear diff was hitting at the same time his front was trying to climb. I guess my 101" wheelbase vs. his 94"ish wheelbase makes just enough difference here? 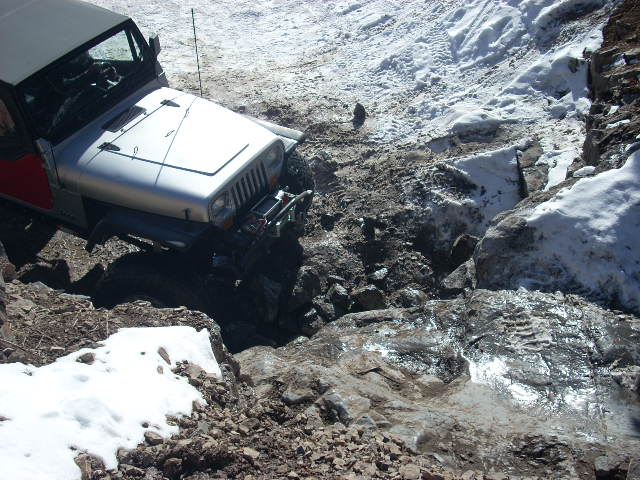 Here's where I broke my junk (again). "Waynes World" is a pretty nasty waterfall that I've never made it up yet. I think I've been on it 4 times with this Jeep and have never made it up there yet. Maybe I'll just avoid this obstacle and continue on to "Constrictor" to even see the trail. 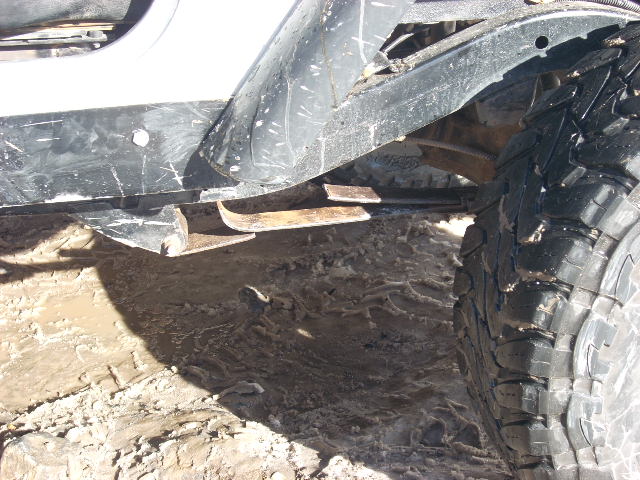 I'm kinda glad I had the military wrap. Made it WAY easier to get this junk off the trail. The bad thing about this is I just put these "new" springs on 12-31-07. I broke this one the next day. I'm starting to wonder about my leaf springs. 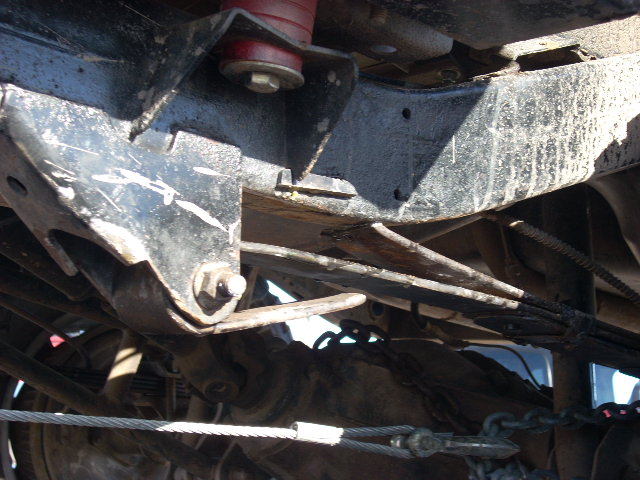 Here's the detailed trail fix. Larry had the chain with turned out to be the PERFECT solution and I just ran my winch cable under the jeep to keep things in location front-rear. The military wrap is stuffed in the spring hanger enough that it's controlling side to side movement pretty well. Yet another reason chain is useful :D I don't think my winch cable is even really damaged, but time will tell.

I think I'll give the XJ springs ONE more shot. I've not had catastrophic failure like this until now, so I'm just chalking this up to having a defective spring. The fact that it broke where it did is kind of weird to me as well. My fatigue points are usually MUCH closer to the spring eye than that. I will be collecting some springs, heims and links through the coming year, though.