Since we blew EJS 2018, Eric and I take a couple days to check out the Swell 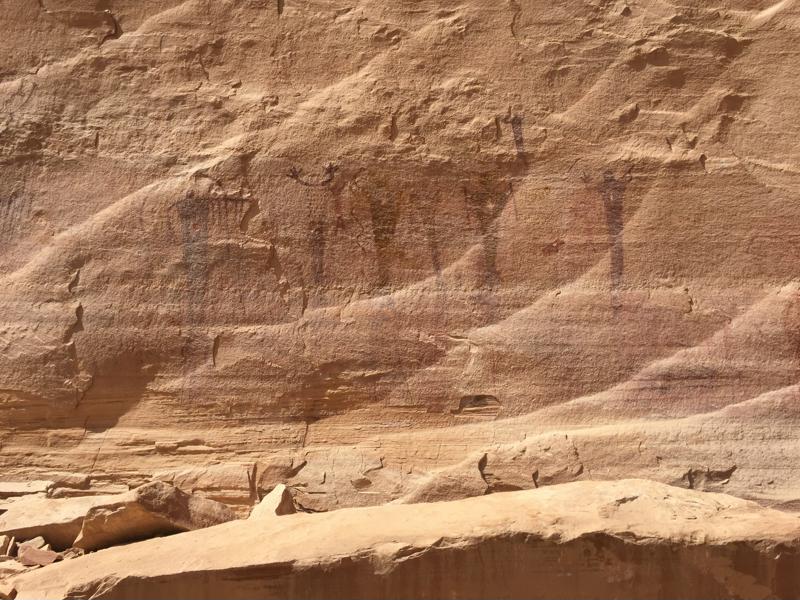 Well, here we are on the trail already. Buckhorn Wash Panel after we unload and head down the road a ways.

San Rafael Bridge. Cool spot with some impressive engineering for the time. I think I read that this was the only suspension bridge in UT? 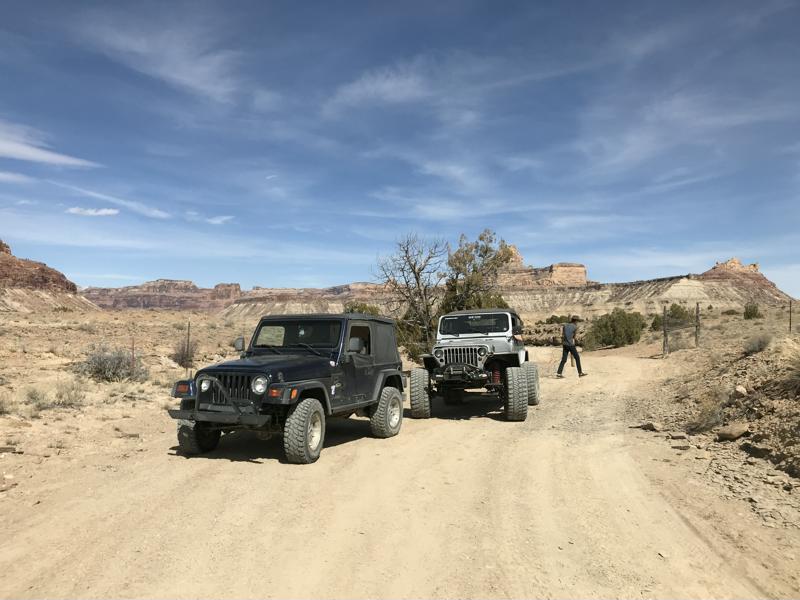 Eric closing a fence after we go through the gate. It was closed. We went through and left the gate as we found it, closed. That's an important thing in the west. 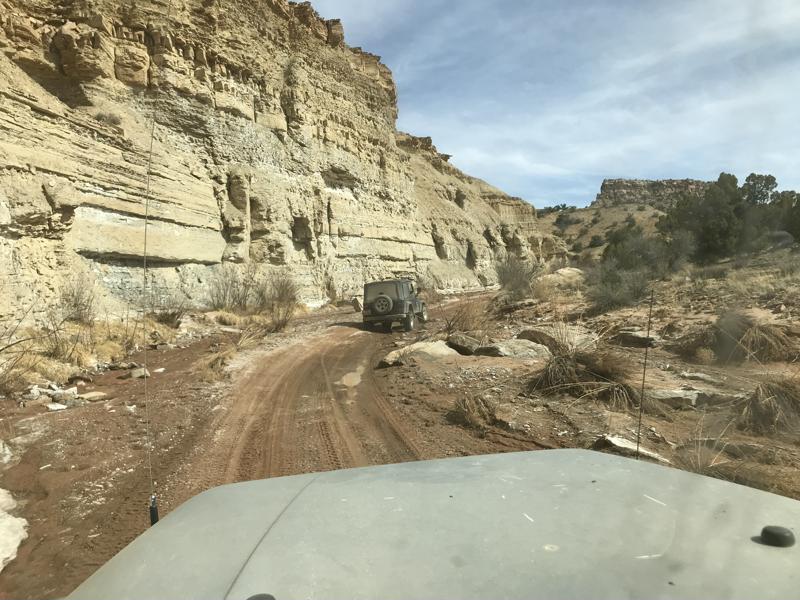 Cane Wash was kind of muddy to be honest. Made a mess of my Jeep. Lynds and I were getting junk flipped up from the tires all the time. (whine, whine....I was out of the office so I'm good to go) 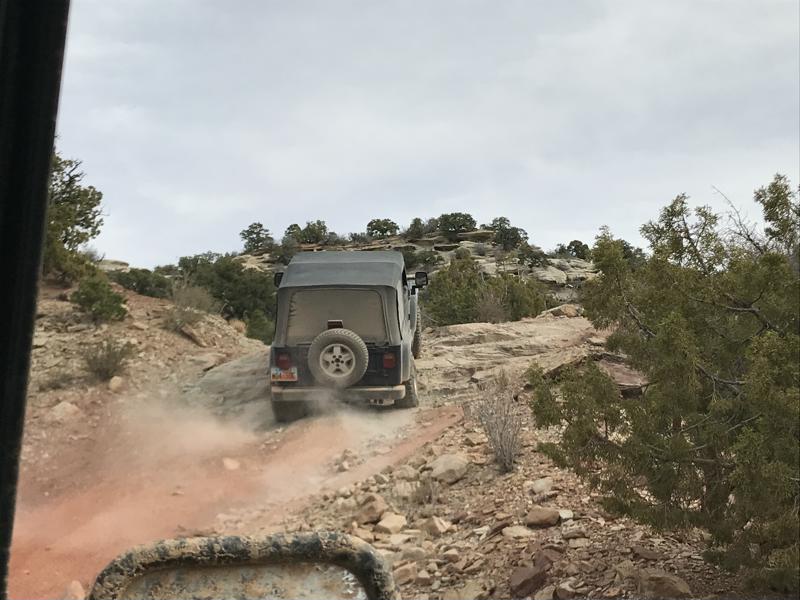 Eric is working his Jeep a little headed on the Sinbad trail. We parked the tow rig/trailer at Buckhorn well parking lot, hit the dirt road down Buckhorn Wash to the panel and Swasey Bridge. After the bridge, we took the trail in Cane Wash. It got a little muddy (see the mirror?). We're nearing the end of the day and just looking to get down towards Swasey Cabin to camp for the night. 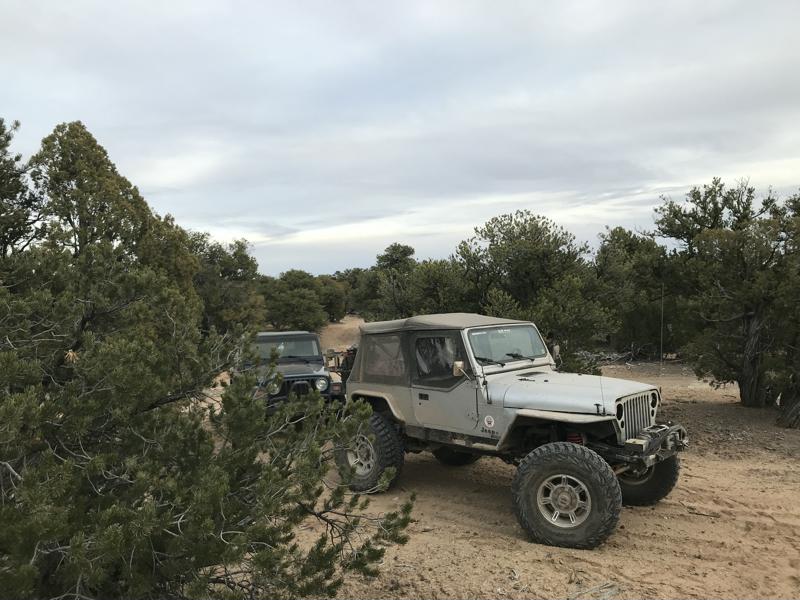 So, we found a place to camp. Heated up some Chunky soup for dinner and had some crackers and water. Not a bad way to go. I am leaning more and more towards minimalistishness when on the trail. Easier to pack. I don't really even want an extravagent meal out there? 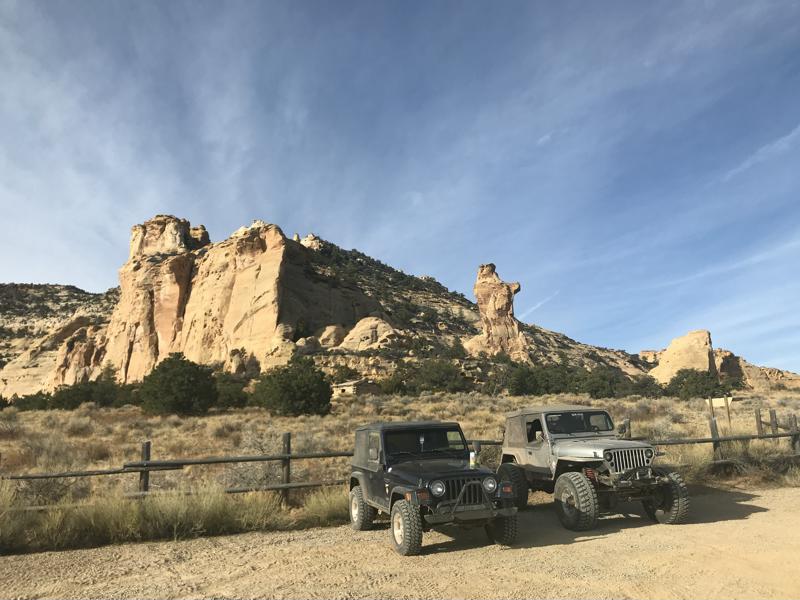 First thing in the morning, we break camp and drive the 15 minutes to Swasey Cabin. Then head into Eagle Canyon. 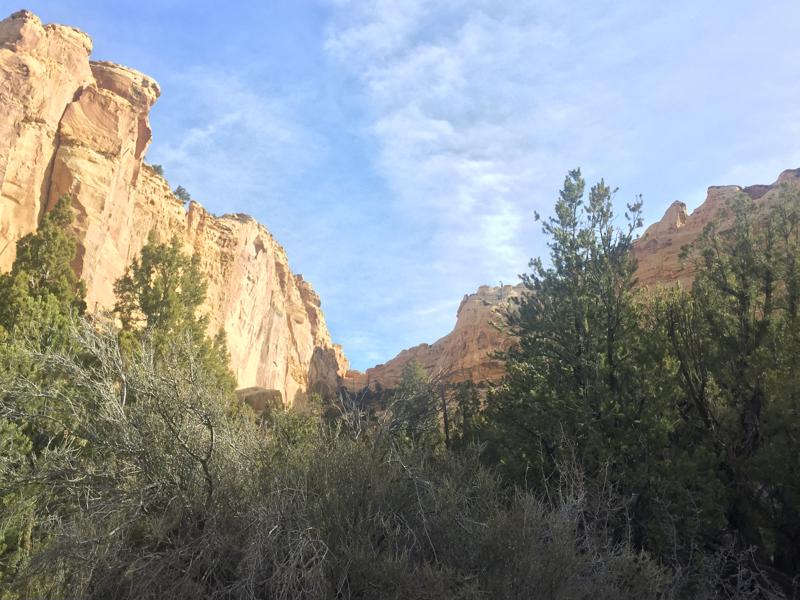 Quick shot by Lynds with the iPhone up a cool little box canyon in Eagle Canyon. It'd be cool to hike up there? 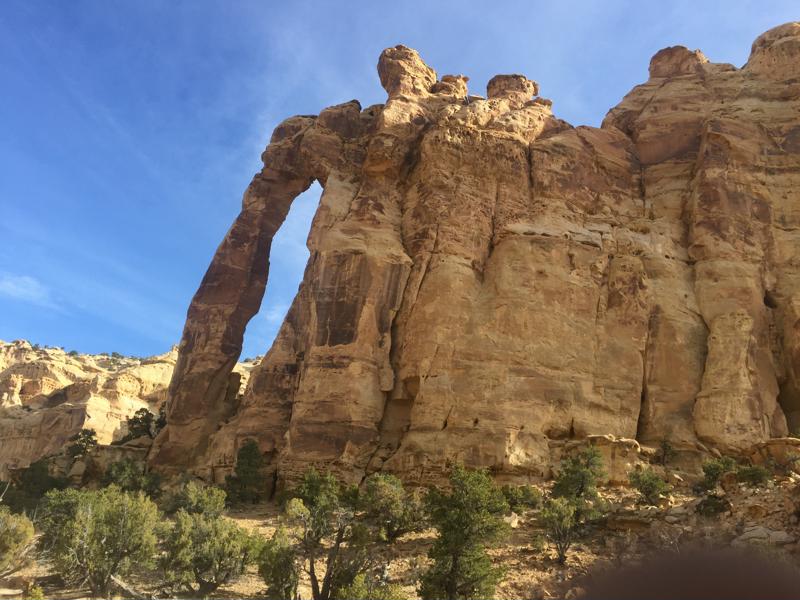 I think this is named "Eagle Canyon Arch"? Pretty original name. Anyway, it's a cool spot. We stopped for a picture real fast. Moved on. We were trying to do Eagle Canyon, Eva Conover and then north up Fuller Bottom (we were discouraged from going south down it at the Visitors Center in CastleDale the day before). 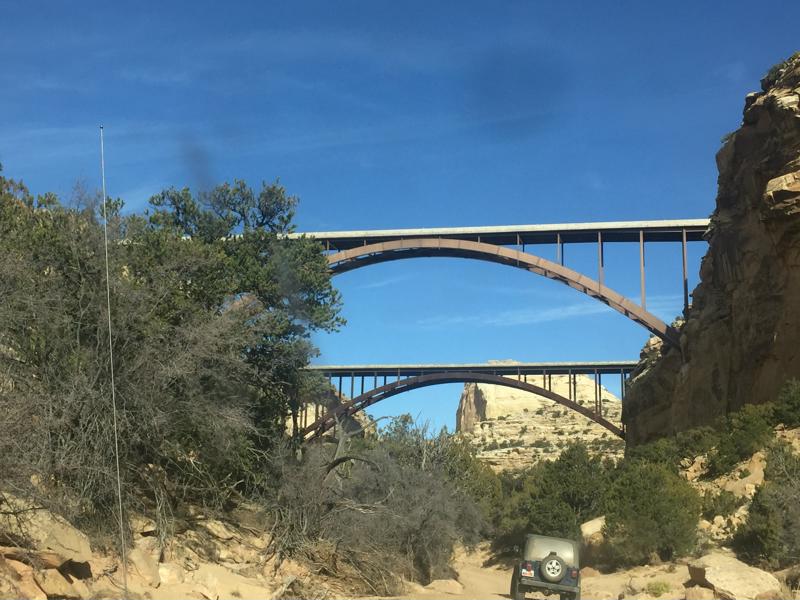 Ah, this is cool. I don't know why I think this is so cool but I really like it. These are the bridges over I70. Pretty cool to me. 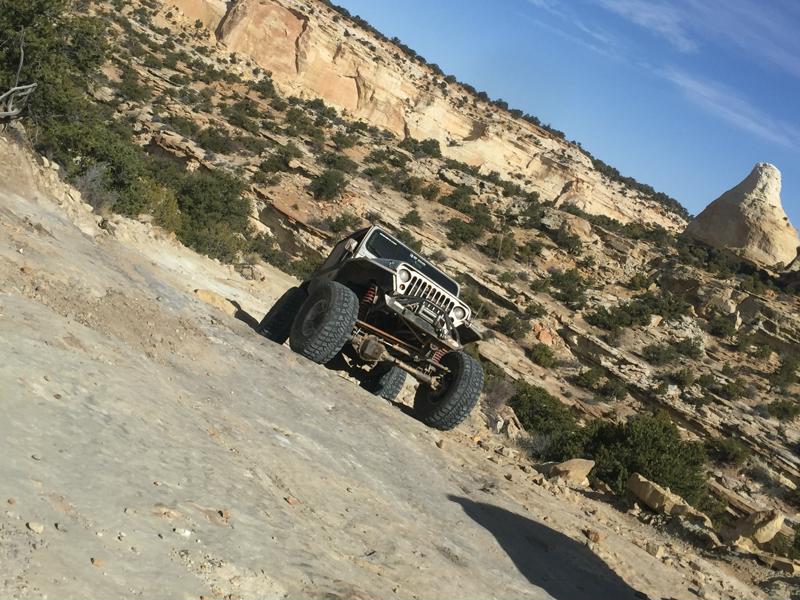 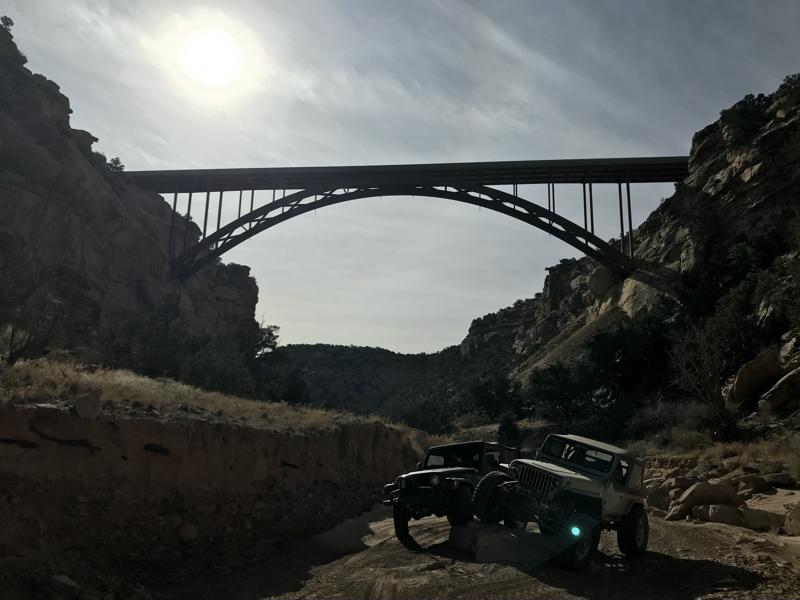 Eric pulled up on a rock and someone snapped a picture. (not an awesome one, but a picture nonetheless) 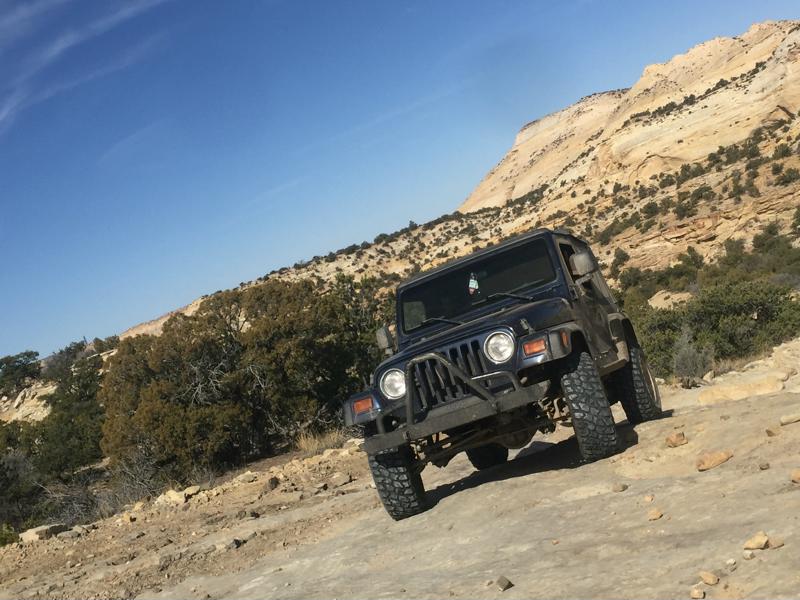 This is climbing up out of Eagle Canyon toward Secret Mesa (I think?). I'd been in 2WD for the bulk of the trip and I think I had to lock my hubs here? Eric thought that quite amusing as he had just walked up that spot with his smaller rig just earlier. 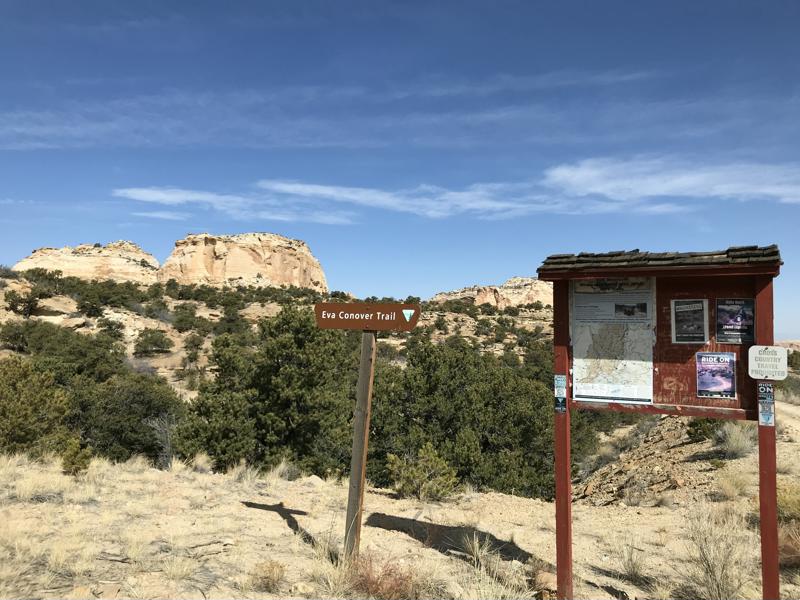 ...and here we are. Headed north on Eva Conover. Fun trail 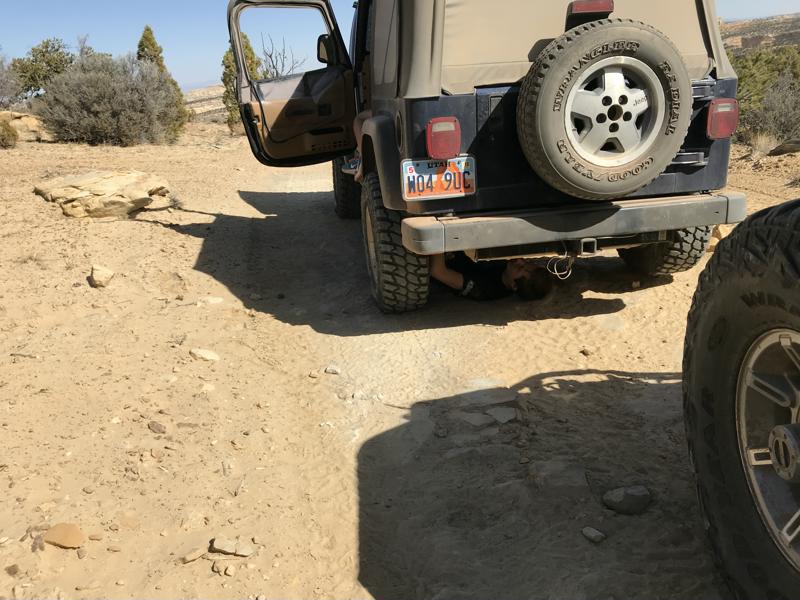 ...and why is Eric under his TJ in the dirt? 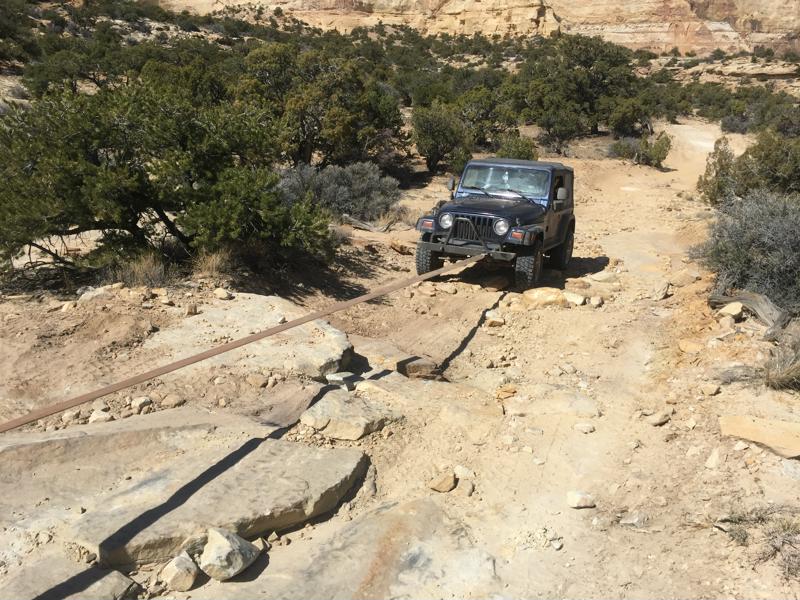 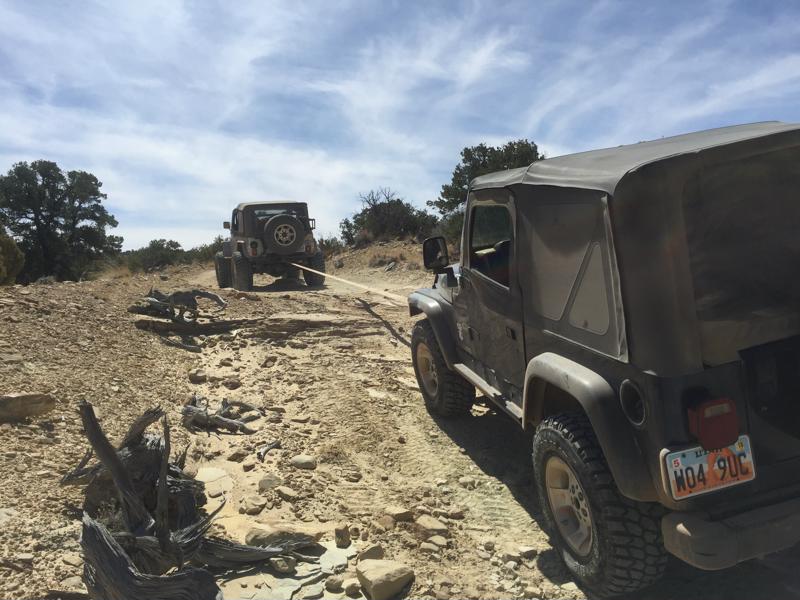 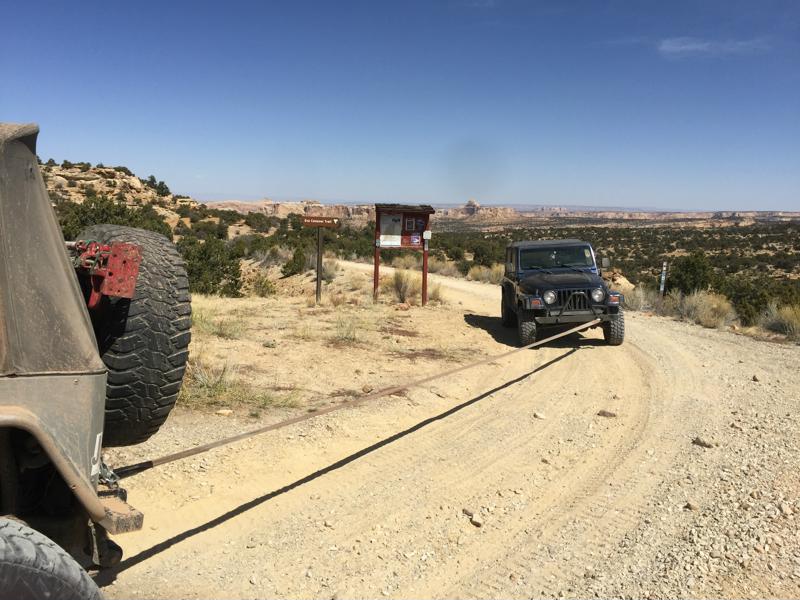 ...and we're out of Eva Conover now. (at least my welds on his bumper held together) 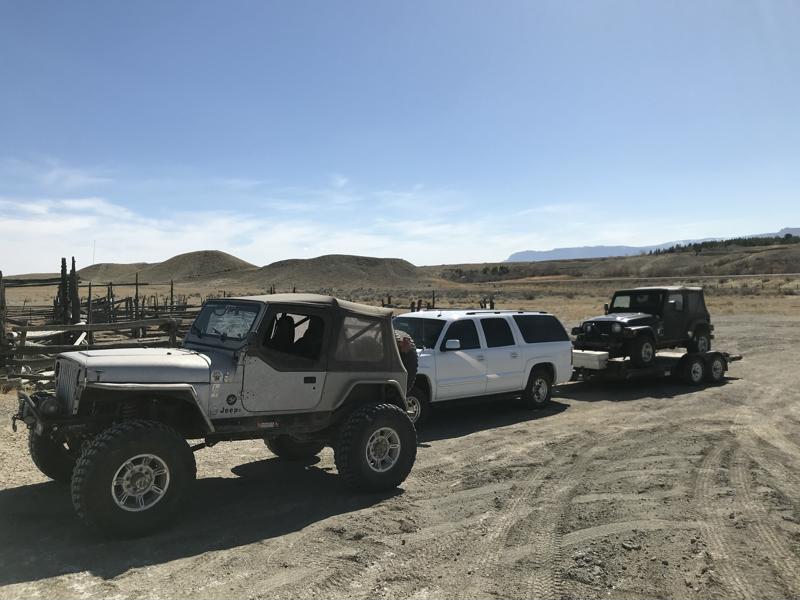 After about 45-50 miles of being towed to the Suburban, we've got the TJ on the trailer and now we need to figure out who's driving what home. I chose to drive the trail Jeep as it's a bit of a handful in the canyons. The Suburban handles the trailer pretty well. If he follows me we'll be fine? Driving my Jeep on the highway 150 miles is not going to be real fun?