Another day trip. First trip with the 40" MTRs. They actually work quite well even though I didn't dare air them down below 10-11 lbs (no beadlocks). They're not a Creepy Crawler, but they are respectable at worst. 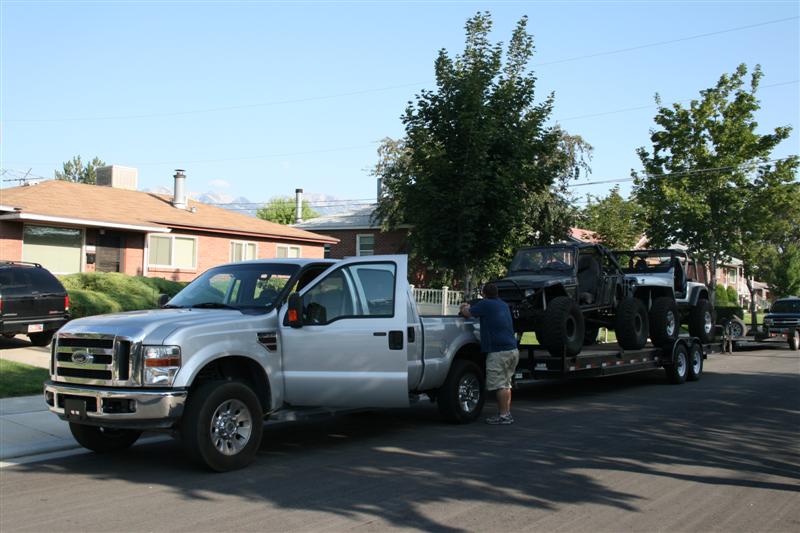 We used Ross Jorgensen's truck to haul my pile and Ryan's Zuk on my kewl trailer. The truck/trailer handled the load well. The best part is I didn't have to drive. :D I could get used to this chauffer thing. 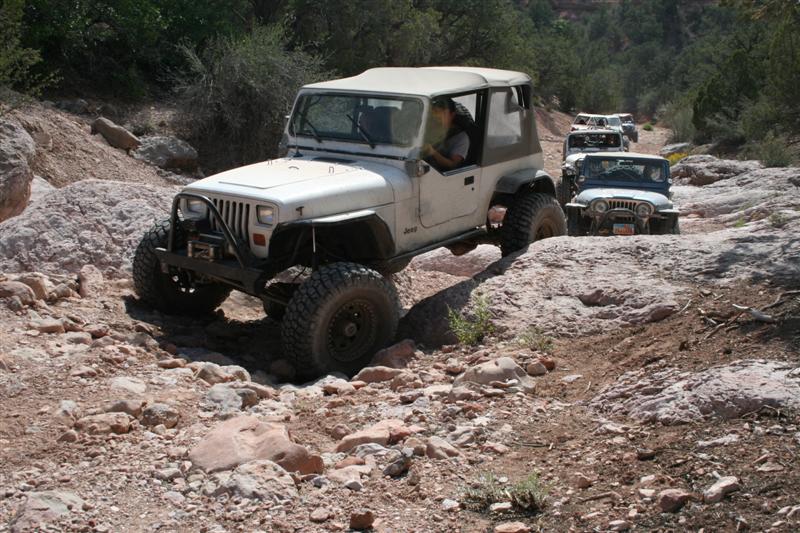 Here's the first obstacle on Crazy 8. (at least the first place Eric jumped out to take pictures). 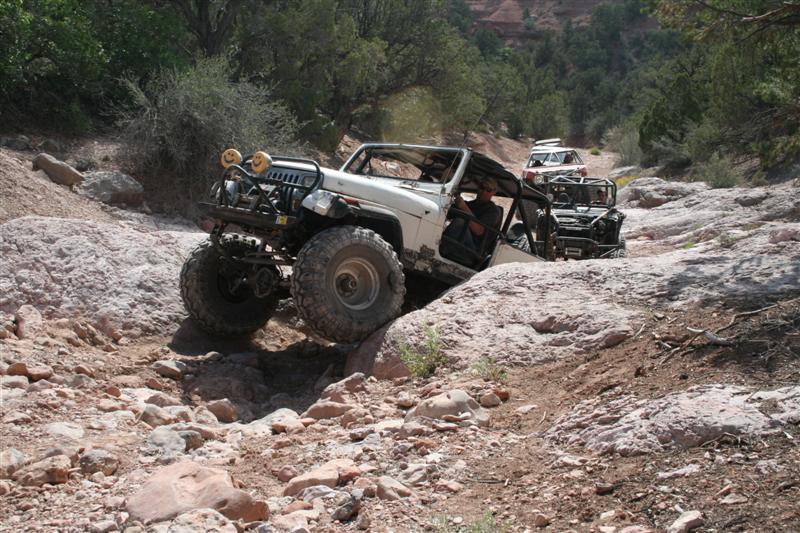 Here's a very experienced YJ. Owner is Sheldon Barney from Wellington. If those fenders could talk. :D He did make it without D44 carnage through the whole trail. Great folks to run a trail with. 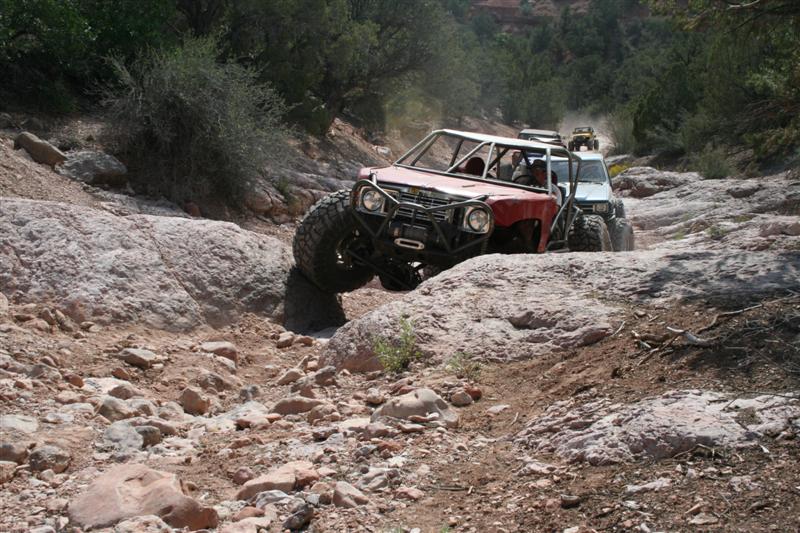 This guy was from Sandy. Jared was his name I believe. The Pit-Bull's worked quite well (44"? I believe). Made a couple of obstacles just look boring. They really weren't boring obstacles, but the tire size/grip made them look that way. Nice guy and I'm super jealous of his tow rig. Very nice Ram with a flatbed. 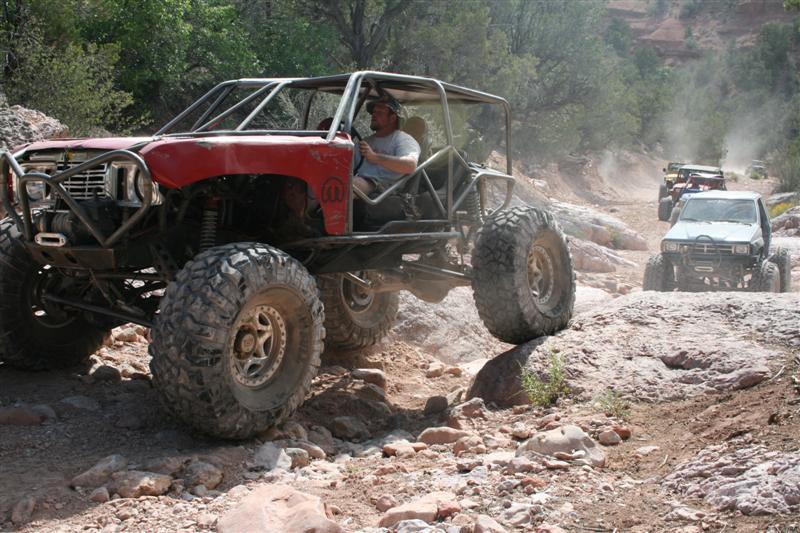 The buggy worked quite well also. I'd love a set of those beadlocks. 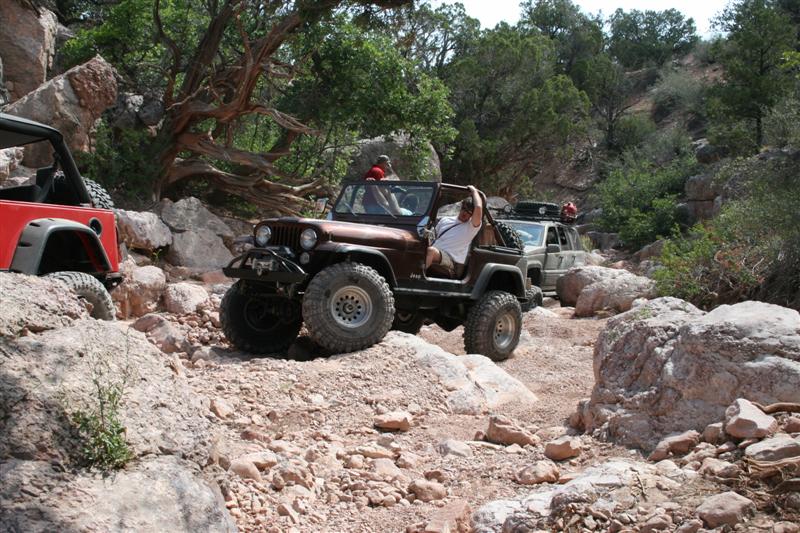 A very nice brown CJ was with us on the trail. Well, built, nice Jeep. I think it won first in class at the Teraplus show. He did get a little trail damage, though. Kind of sucks, but he took it like a man. :D 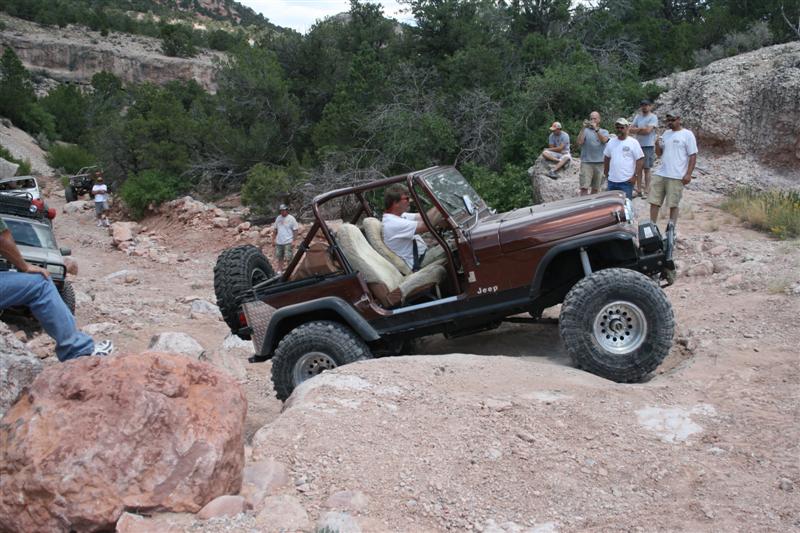 Here he is near the end fo the trail. Shows the damage right behind the door. 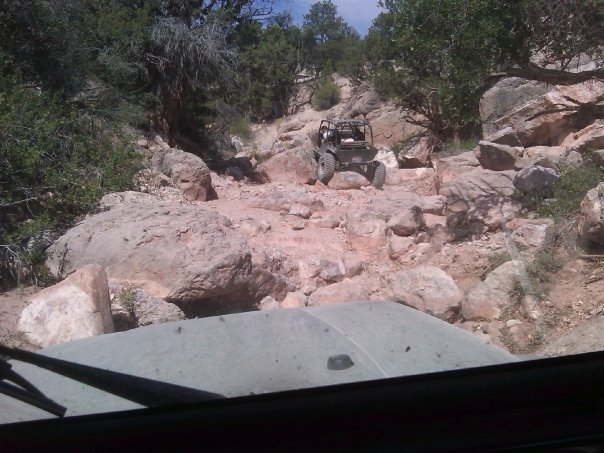 Ross snapped this picture from the passenger seat. This looks like a fun trail. It's always fun to take first time guys out. :D 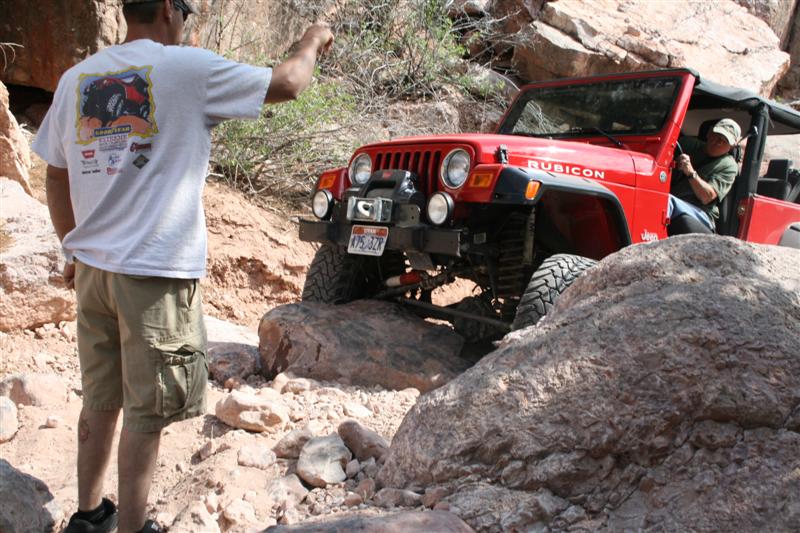 This is a fun little pinch spot in the trail. This LJ had a bit of trouble through there, but no real issues. We did have a ZJ have some challenges through there. 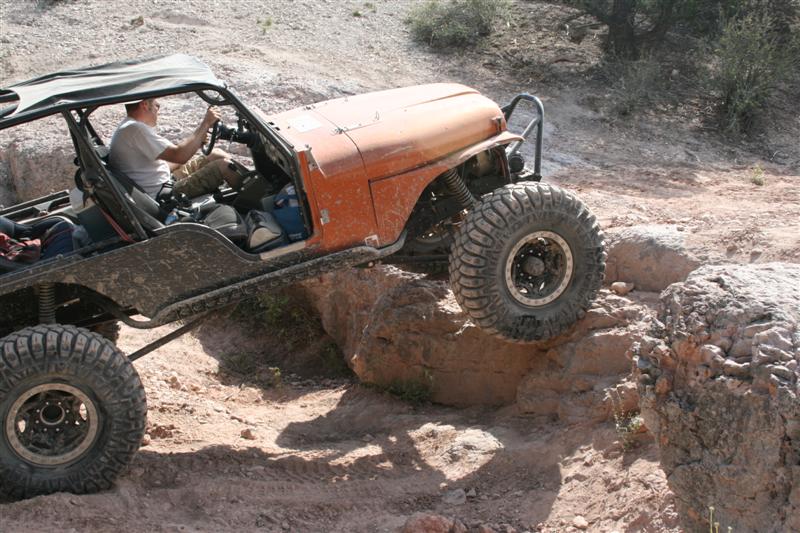 We have a Seth Bowers sighting. Awesome rig. Love the 40" Creeps. 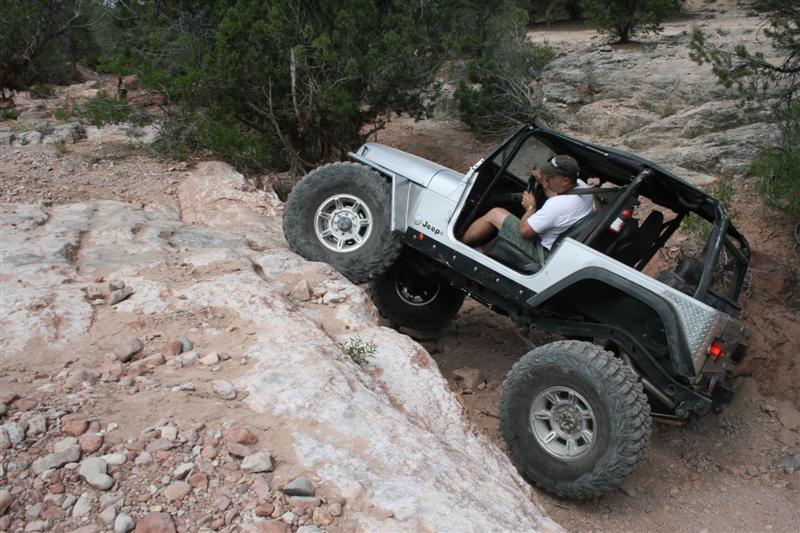 Here's where us mortals had to climb. I did want to give the other thing a shot, but had to winch here last time I ran this trail. Mebbee next time? (that other climb is a little over my head though) 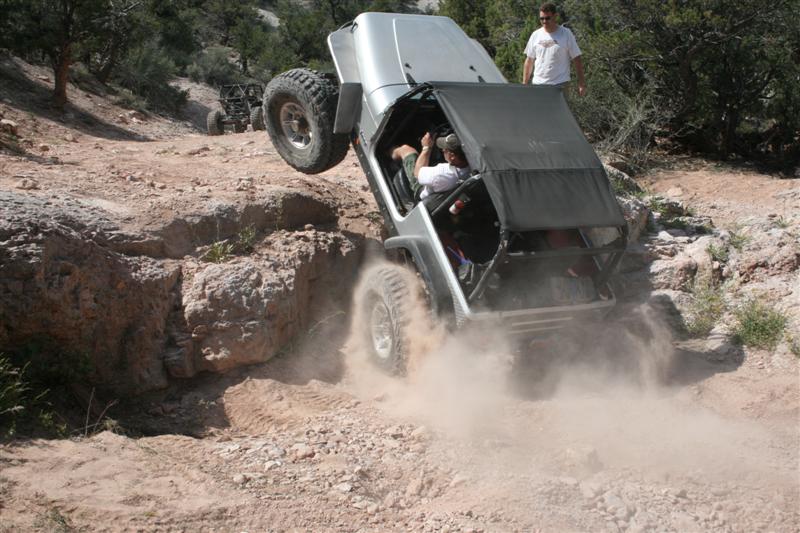 Uh, I'm not sure HOW this happened, but I was SURPRISED to be in this kind of a wheelstand on this trail at this point. It got my attention pretty good. Seth missed it with his video, but Eric snapped it with the digital. Good shot IMHO. 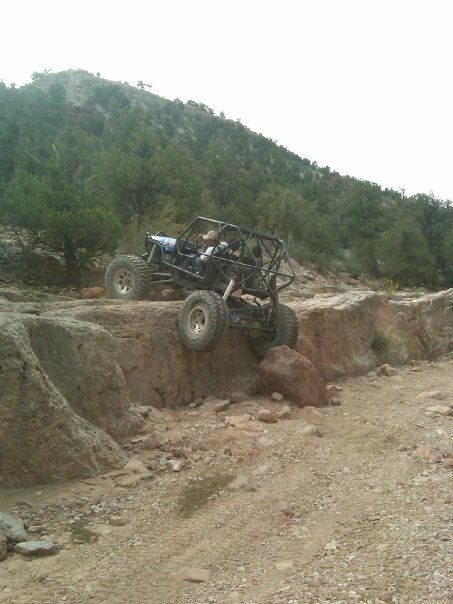 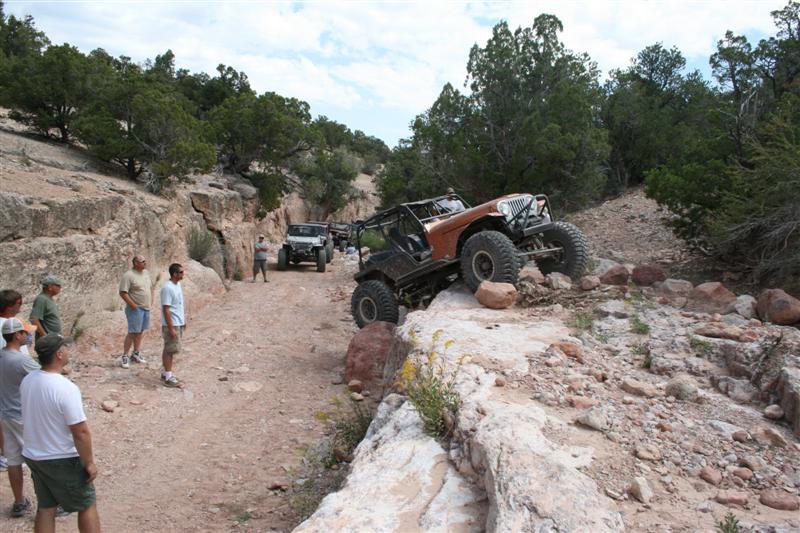 Here's Seth crawling a pretty decent climb. Craig Stumph had just crawled this before. The rest of us mortal folk moved down to a more reasonable spot in the ledge. 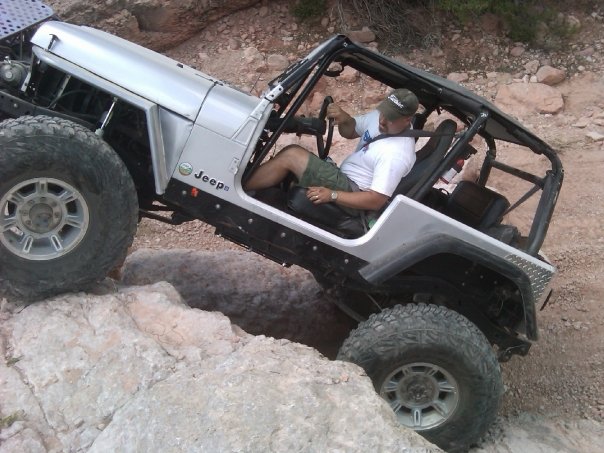 Here's the rock I backed into and whacked my head. The one under my skidplate I backed my rear passenger frame rail into. Shook EVERYTHING loose in the Jeep and I whacked my head on the cage pretty good. I did save a flop, but I'm not sure it was worth it? My heads been an issue for a long time, but now I have an excuse. {photo is from Ross Jorgensen} 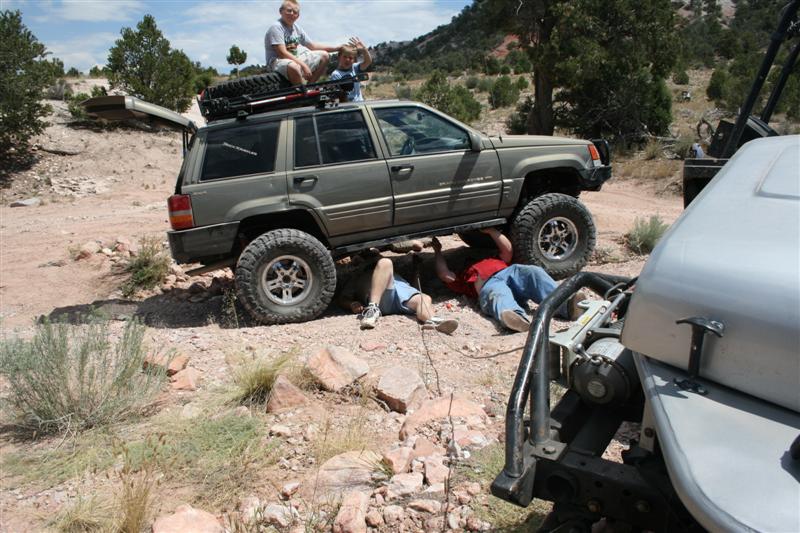 Here's the ZJ I was mentioning earlier. They used my winch to fix their exhaust. Good trail repair :D