Well, I'm never much for day trips, but this one kind of made sense. I've got a new job so it's kind of hard to break away (yet) and Broc only had Sat. to take off and head. He's talked about going for a few years, but we'd never been able to make it work. We left my house at 5:30am and pulled off at the Gemini Bridges parking lot about 9:15. Just in time for familiar people to start showing up after meeting up at the Moab Cinema at 9 am. Good timing. While they aired down, I pulled my Jeep off the trailer, shed the doors and windows and aired my pile down and we hit the trail.

Jeff Stevens had scored some new 40" MTRs and this was their break in run. They seem a lot better tire in person than the pictures I've seen on the internet. They did seem to work OK for him but time will tell. They do look HUGE on his little 'zuk buggy. The tread seems a little firm (great compromise on the street) but has some big voids on the outside edges, some 'AT' type tread in the center and some milder mud terrain treads on the inside edges. I've never been a super big fan of the multi-treaded single tire, but maybe these will work out OK? 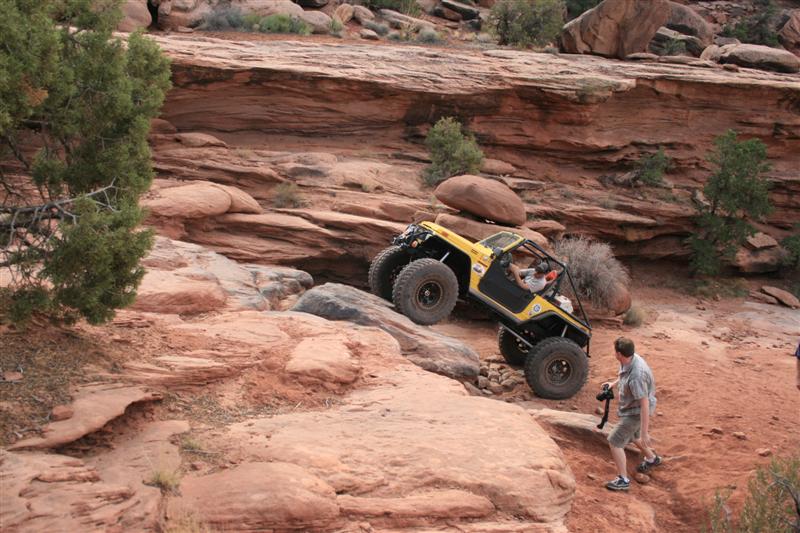 My son Eric used my Canon XTi to take all the pictures on this page. Here's Jeff on the first Rusty Nail obstacle showing off the new skins. The 40" tire is pretty sweet on the bigger rock voids as they just roll through things easier than my 37" tires. Jeff has a tendancy to make some things look pretty easy though too. 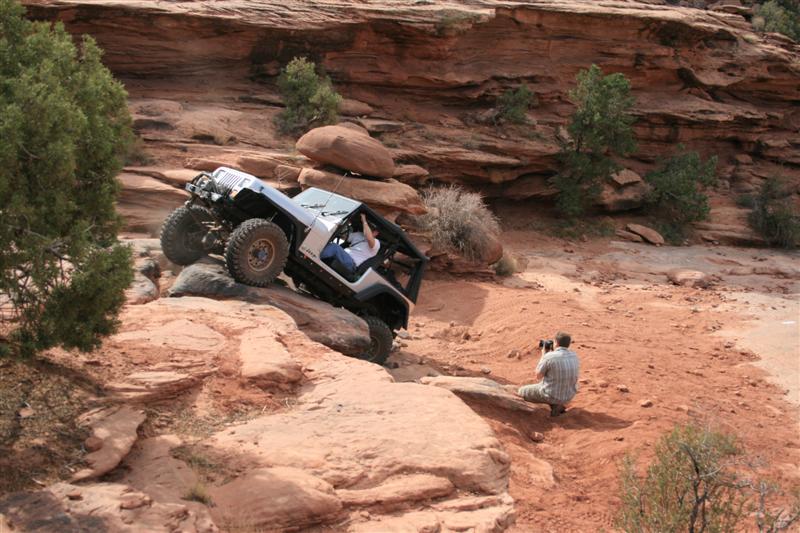 In contrast, here's me following Jeff on the same obstacle with my cute little Maxxis tires. I'm not sure why I drive with one hand nowadays, but whatever. I took a couple of tries on this obstacle that I usually just drive right up and then was able to make it. I lost all my ridership in my Jeep on this obstacle for some reason. I think my younger brother Broc was a little dumbfounded that we actually expected to climb this? 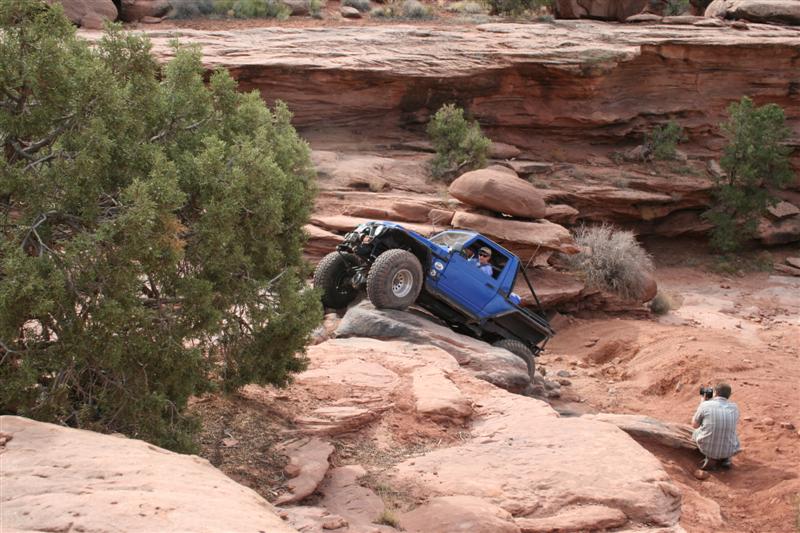 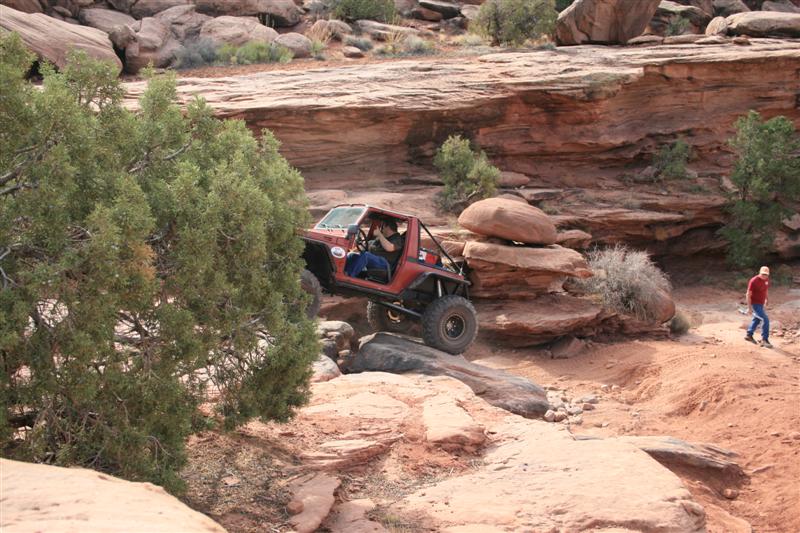 Here's another trail buddy for the day. I missed his name, but he's from Draper and has a house down there in Moab. I believe Jeff built this little rig as well. 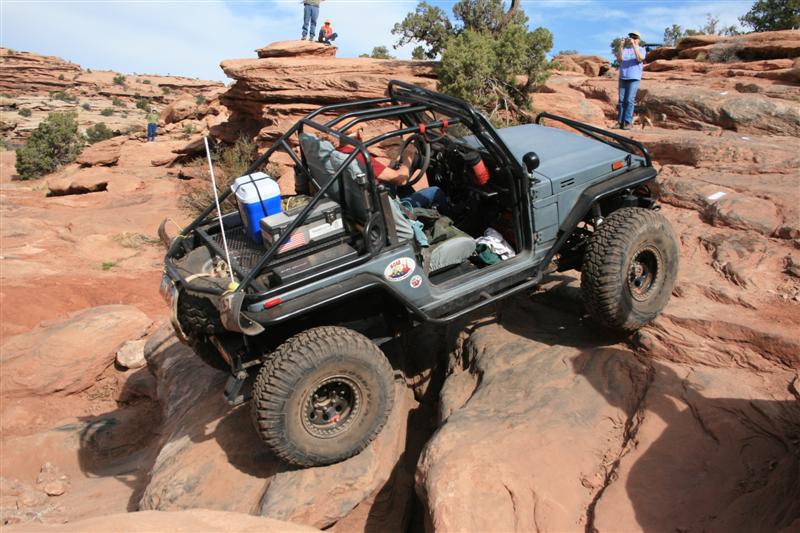 Jim was along with us and marking the trail. Fun guy to have along as well. One of those 'sleeper' kind of drivers that makes things look easy. 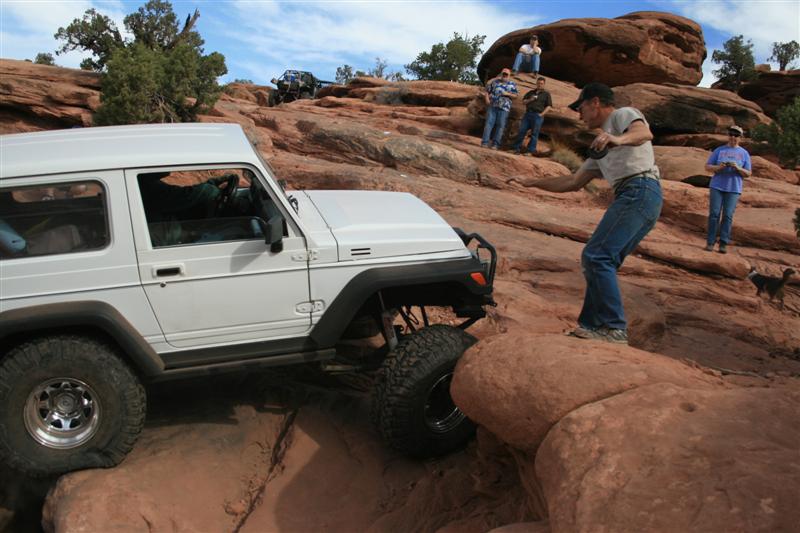 Hey, a full bodied tintop 'zuk. Pretty nice little rig. It was interesting to see it handle obstacles with it's short wheelbase as most of us are just over 100". I'm not sure what this wheelbase is, but I'd estimate it around 80-84" or so? He'd just received some trail rash on this obstacle on the very rear passenger corner. 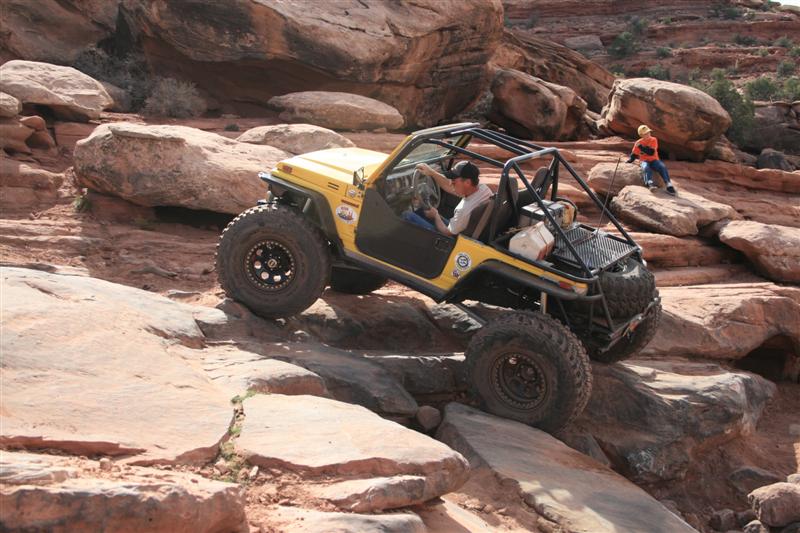 This obstacle is where those 40" tires really shined. Jeff took a line that stuck him right in a hole (more about this hole in a minute :D) and he just drove out of it like it wasn't a big deal. 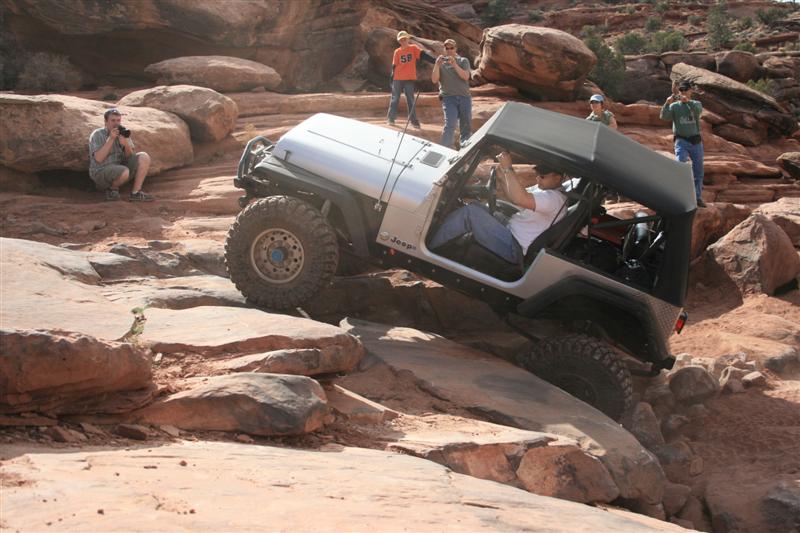 The hole I'm talking about is what's swallowing my 37" Maxxis Creepy Crawler in this shot. I missed the line at first and gave it a little throttle. My rear end moved over and I heard my 14 bolt hit something quite solid (not uncommon). I had to back up and move the rear over about 4" or so and ended up here pretty quickly. I think I climbed this obstacle without much drama at all until I got to the top and tried to high center myself on the big rock at the top that is totally avoidable if you even try. I was getting a little nervous about needing a tug off that rock and then I finally broke free and pulled out of it somehow. :D 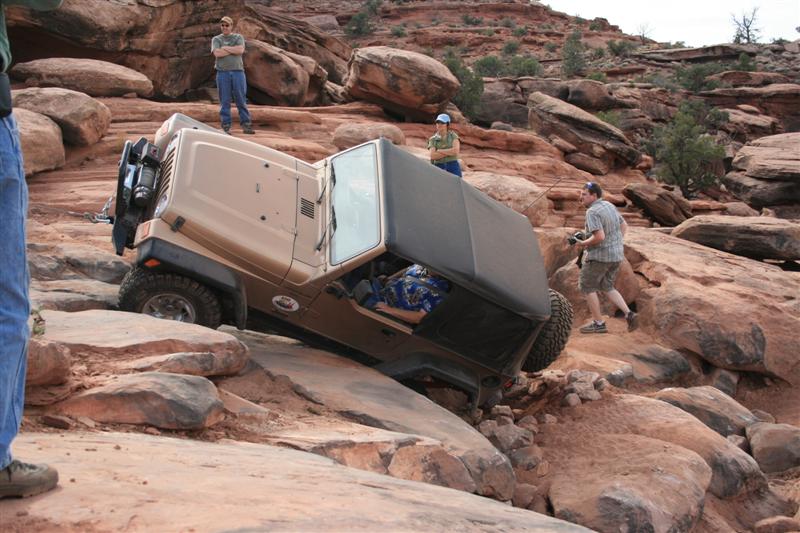 Well, here's we things got a little interesting. Remember that big hole? 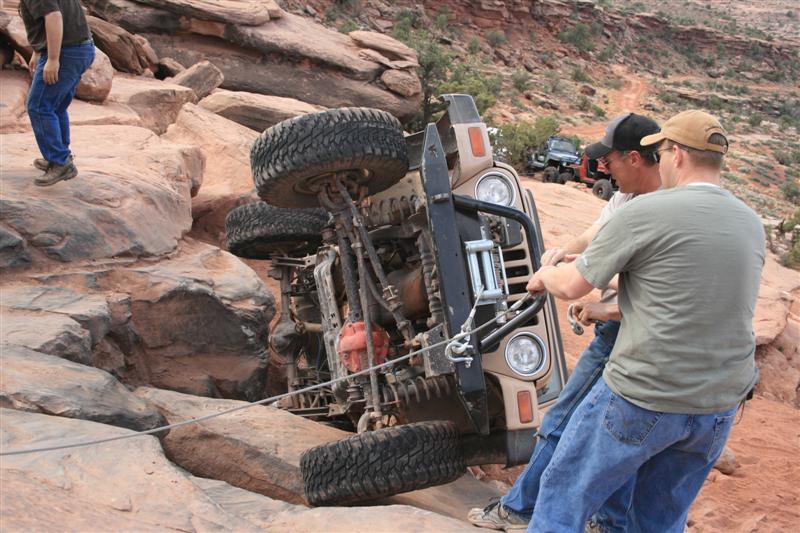 It's pretty stinking big. That's a full on flop that turned out as well as it possibly could have. He landed on his slider and that kept him from going over all the way and busting up his Jeep pretty good. 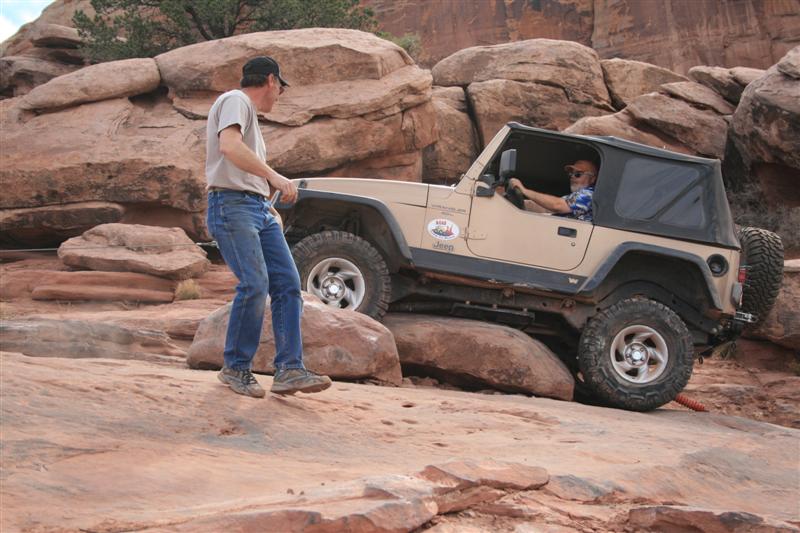 You can see the impact and trail "damage" on this slider about mid-door. The Jeep was NONE the worse for wear. (this is the rock I was having issues getting over. I think my winch cable is still attached to his bumper.

Broc (Bridger's dad), gets visitation with Bridger from his "school" some weekends. We were glad to have him along with us in the real world. He's a "special" kid and it's fun to get him out of his comfortable, femine environment sometimes. 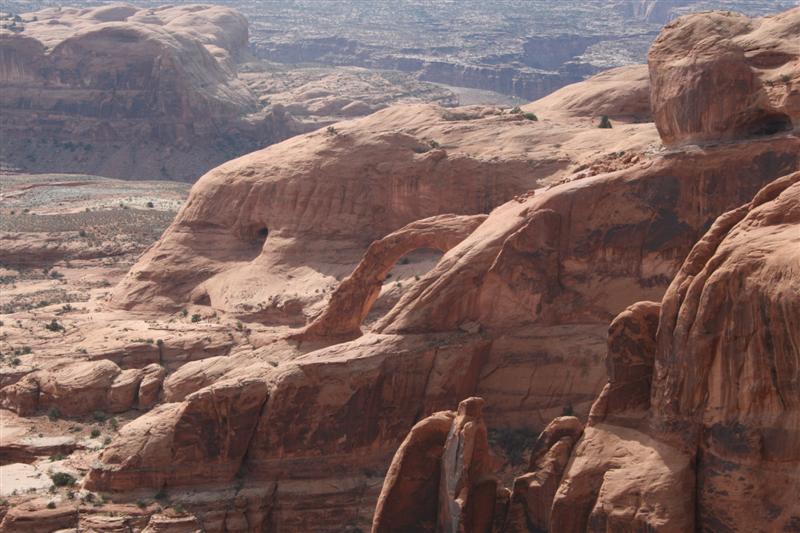 We took the Golden Spike trail to the "Where Eagles Dare" area, over "Phobia hill" (which is QUITE steep on the way down) to this cool arch. Jim was our guide through this area. After a couple of more uneventful miles we hit the pavement and headed back to the truck. My Jeep reaffirmed it's hate of street driving as we headed up the hill out of Moab back to the safety of the trailer and the Super Duty. I could hit about 50 mph, but after a few minutes, the hill and the 5 psi tires started really heating my my 700R4 so I slowed down and coasted to the trailer as we hit the top of the hill. Good day. I'm ready to do it again, but I've got Little League baseball coming up PDQ so I'm not sure how things will work out?